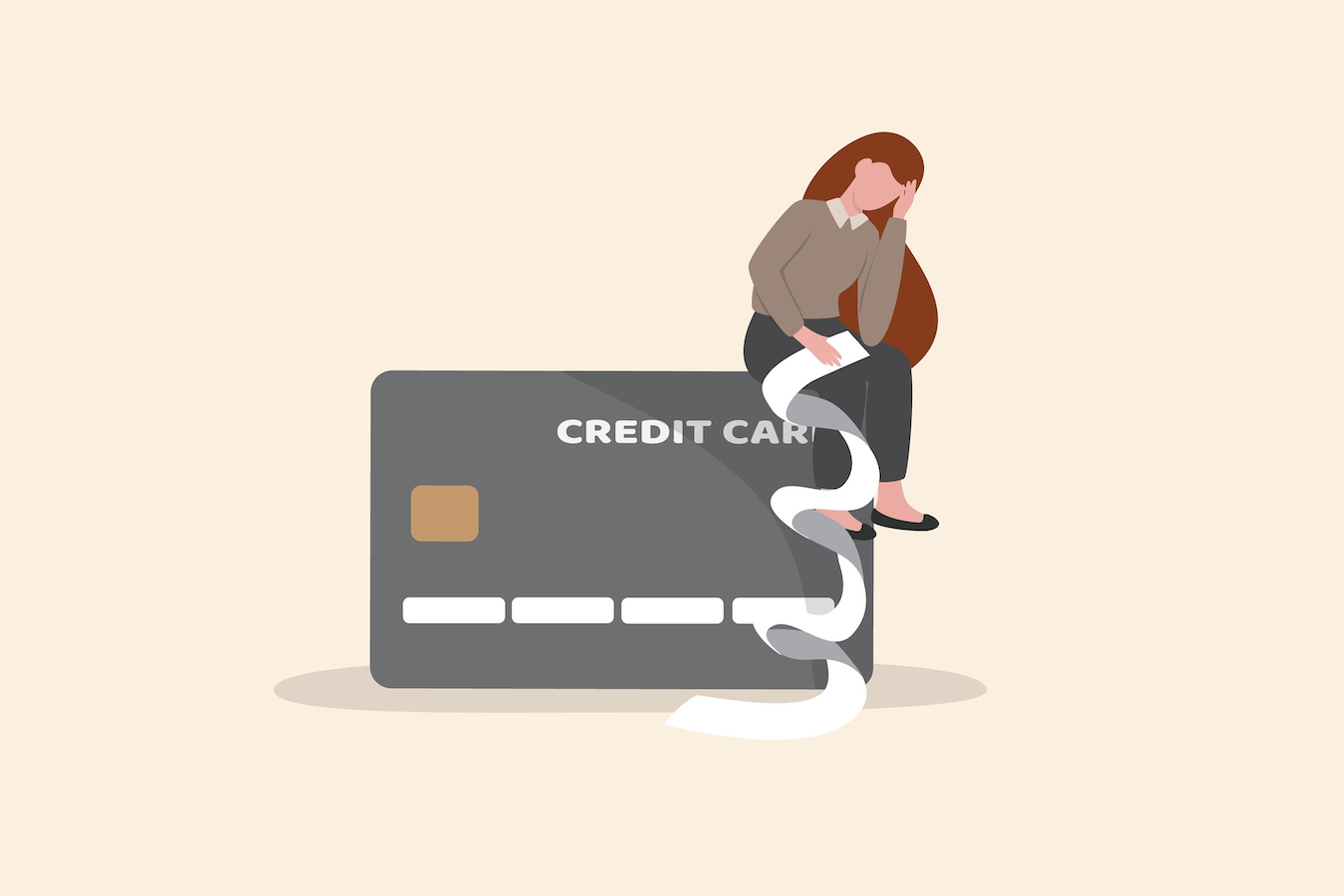 New data shows nearly half of Americans (46%) are in credit card debt. Those in debt are an average of $6,093 under water, according to a survey of 1,001 Americans from Anytime Estimate.

With 200 million credit card holders in the U.S. alone, paying with plastic is a go-to option for Americans building credit and affording everyday purchases.[1] But the latter has been particularly difficult in 2022 amid staggering levels of inflation.[2]

Talk of a potential recession and general economic uncertainty has many Americans on edge. Even two-thirds of those without credit card debt (66%) worry current conditions could soon have them falling behind on card payments, according to the survey.

Read on to learn more about how credit card debt affects Americans in 2022.

Nearly Half of Americans Are in Credit Card Debt

About 46% of American credit card users carry a balance on their account from month to month.

Although that snapshot is alarming, the situation is less dire than it was a year ago, when 55% of card holders were in debt. The cost of goods may be rising in 2022, but so too are U.S. wages and employment rates.[3] [4]

As a result, the share of Americans in credit card debt is back to the distressing-but-familiar pre-pandemic status quo.

Of the 46% of Americans who carry credit card debt, their average balance is $6,093.

Millennials, in particular, are 44% more likely than baby boomers to have missed a credit card payment.

Of the 54% of Americans who aren't currently in credit card debt, two-thirds (66%) worry they could soon go into debt for the first time amid economic uncertainty:

Getting out of credit card debt can take years for many Americans.

Those Who Started Using Credit Cards Earlier Have Less Debt

Americans who started using their cards at age 25 or younger are 13% more likely to not carry credit card debt compared to those who took out their first credit cards at a later age.

Millennials are being hit disproportionately hard: They are 4x more likely than baby boomers to report missing a payment in 2022 (13% vs. 3%).

At the extreme end of the spending spectrum, 3% of millennials say they have missed more than 20 payments since 2017, and an additional 3% say they "usually" miss their credit card payment.

About 46% of Americans have missed a credit card payment at some point, but that doesn't mean they're reckless spenders. In many cases, they missed a payment because they were struggling to make ends meet.

Half of Americans who have missed a credit card payment (50%) say they did so to afford essential living expenses, such as food, housing, or utilities.

One-third of respondents (37%), however, admit they missed a credit card payment simply because they forgot to pay.

Overall, the top reasons credit card users report missing payments are because they:

The survey findings also reveal that the process of paying off student loans is forcing more people into credit card debt. Americans are 47% more likely than they were in 2021 to report that going to college contributed to them being in credit card debt.

It's worth watching to see how those numbers evolve following President Joe Biden's plan to forgive $10,000 to $20,000 in student loans for some borrowers.[5]

Why Some Credit Card Users Have Never Missed a Payment

About 54% of Americans say they have never missed a credit card payment. The most common reason for never missing a payment is having enough money on hand (44%). Conversely, only 18% cite living frugally.

Always having enough money to make payments was the most popular answer for Gen Z, millennials, and baby boomers.

The findings also suggest younger Americans may be more cautious about nonessential spending. About 31% of Gen Z respondents say they've never had debt because they spend less than they earn, while just 18% of baby boomers say the same.

Credit Card Debt Ranks as the Most Stressful Type of Debt

Americans with credit card debt also have these types of debt:

Americans rank credit card debt as their most stressful form of debt, ahead of personal loans and medical debt. That's no surprise considering credit cards typically have higher interest rates than other forms of debt.[6]

Overall, 84% of Americans in credit card debt are stressed about their debt, including 20% who are extremely stressed.

Some card holders are especially pessimistic about their chances of climbing out of credit card debt. About 3% of those in credit card debt say they'll never get out of debt, and 11% say it will take more than five years.

Many Americans struggle to cobble together adequate savings, and credit card debt exacerbates the problem.

About 26% of Americans who have had credit card debt say it prevented them from building emergency savings. And 25% say it stopped them from paying off other debt.

Additionally, about 1 in 5 Americans who have had credit card debt (18%) say it prevented them from purchasing a home.

Of the 76% of Americans who have had credit card debt, the most common things it prevented them from doing are:

What Are the Most Common Reasons for Getting a Credit Card?

The majority of credit card users (70%) own more than one card, and 58% use two or more cards on a regular basis. Our survey also examined why people open their cards.

More than half of Americans say they've applied for a credit card to help build their credit score — making it the most common reason for signing up.

The most common reasons Americans have applied for a card include:

Baby boomers are more likely to apply to earn rewards and bonuses, while millennials are more interested in spending flexibility. Millennials are about twice as likely as boomers to apply for a credit card to cover purchases they otherwise couldn't afford (31% vs. 16%).

In addition, millennials (13%) are more than twice as likely as baby boomers (6%) to say they applied for a credit card because they maxed out other cards.

Despite the popularity of credit cards, many Americans lack a real understanding of their cards' policies. Nearly 2 in 5 people (37%) admit to opening a card without prior research, such as opening a card while checking out at a retail store to get a discount:

The risks of credit card use extend beyond personal ignorance, though. About 1 in 3 Americans (31%) have had their credit card information stolen.

Americans Want to Use Their Credit Cards Less Often …

Americans seem to understand that credit card use can expose them to risks, whether through theft or overspending. That may be why nearly 3 in 5 Americans (58%) say they want to decrease their credit card usage.

… But Nearly Half of Americans Depend on Credit Cards for Essentials

As much as Americans would like to limit their credit card usage, many simply can't afford to do so.

About 43% of Americans say they depend on their credit cards for essential living expenses, such as housing, food, and utilities.

Overall, the average respondent in our study reports spending about 30% of the limit on their primary card each month. That's in line with advice from credit experts, who suggest limiting your credit card utilization to 30% or lower. Any higher, and you risk lowering your credit score.[7]

1 in 3 Americans Can't Afford a $2,000 Emergency Without Borrowing

Given Americans' lack of savings, credit cards are especially important for people confronted with large, unexpected bills. About 1 in 3 Americans (32%) say they wouldn't be able to cover a $2,000 emergency without borrowing.

Asked if they could afford to pay for such an emergency, Americans say:

The proprietary data featured in this study comes from an online survey commissioned by Anytime Estimate. One thousand and one people who reported owning at least one credit card were surveyed Aug. 18-19, 2022. Each respondent answered up to 21 questions related to their credit card usage, debt, and purchasing habits.

About 46% of Americans are in credit card debt, and they carry an average debt of $6,093. Learn more.

Although the definition of "too much" varies from person to person, at the high end, about 9% of Americans have at least $20,000 in credit card debt. See how your debt compares.