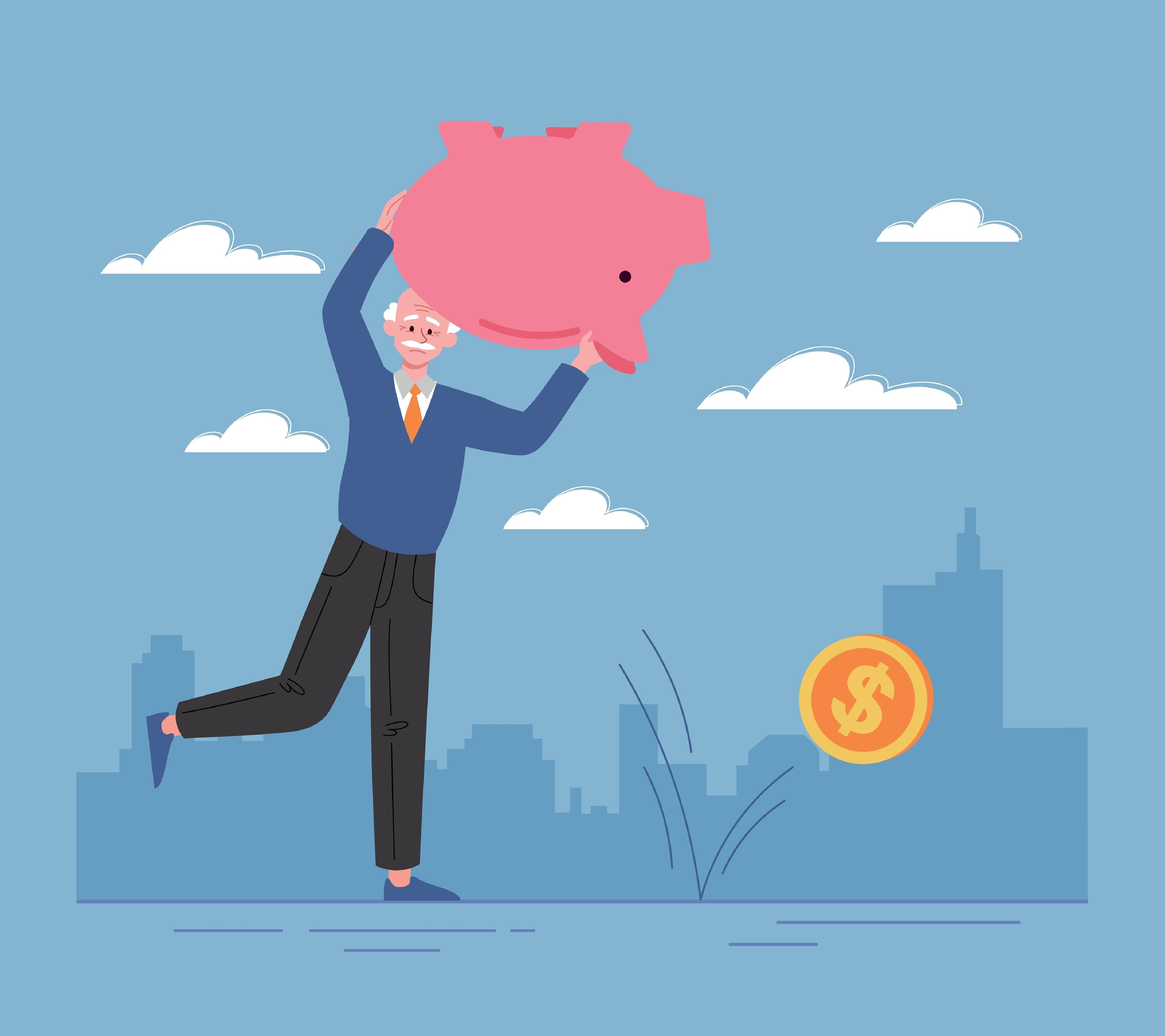 Chronically overworked Americans are no doubt dreaming of the day they can retire. But retirement isn't cheap, and many workers' savings will come up short.

The amount each worker needs to retire varies greatly by individual and depends on the lifestyle they want in retirement. In general, financial planners say workers need 80% of their pre-retirement income each year to cover expenses when they stop working.

To learn more about how Americans are preparing (or failing to prepare) for retirement, we surveyed 1,000 non-retired individuals about their finances, retirement savings, and expectations for their post-career lives.

We found that baby boomers on the cusp of retirement have less than half the recommended savings, with little time to make up the deficit.

Across all age groups, financial stress from the pandemic caused many Americans to stop saving for retirement entirely or spend retirement funds that would have accrued interest for years to come.

Although fewer adults are saving for retirement, those who are investing are setting aside more. In 2022, 68% of Americans are following experts' advice to save 15% or more of their annual income for retirement, compared to 61% prior to March 2020.[2]

That doesn't mean workers are sitting on piles of cash, however. Nearly two-thirds (62%) of Americans raided their retirement savings to pay for expenses during the pandemic, so they may hope to replenish their accounts through higher contributions.

More than one-third (37%) of Americans are not saving for retirement. Of those, more than 1 in 3 (39%) reported $0 in retirement accounts, likely meaning some of them have never saved, or they spent everything they had saved.

Others were forced to stop investing because of the pandemic-induced recession. Approximately 83% of adults who aren't currently saving for retirement were saving before March 2020.

Surprisingly, boomers boast the second-largest share of members who aren't saving for retirement (38%) — behind Gen Z (44%) — even though their generation is most likely to retire soon.

Financial experts encourage workers to start saving for retirement as soon as they can so their money has time to grow.[3]

About half (52%) of Americans who are currently saving for retirement began doing so before their 30s. Boomers, however, started saving later in life, with nearly 1 in 4 (23%) waiting until they were 50 years of age or older.

It's perhaps no surprise, then, that baby boomers face a serious retirement savings shortfall.

Fidelity recommends workers save 8x their annual income by age 60. Baby boomers making the median annual income should have $286,400 in retirement savings, but the median amount saved is only $112,000 — 39% of the recommended amount.[4]

Additionally, about 1 in 5 (18%) millennials started saving even earlier, between 20 to 24 years old, compared to just 9% of boomers.

As a result of early contributions, millennials are on pace to save more than older generations.

Fidelity recommends workers save 3x their annual income by age 40. For workers earning the median U.S. salary, that amounts to about $107,000. Millennials have $70,000 in retirement savings, putting them on pace to reach that mark.[5]

Younger generations are optimistic that saving earlier will help them retire sooner.

Generation Z is the most optimistic about early retirement and is 206% more likely than boomers to believe they could retire before 60.

Gen Z's confidence should be taken with a grain of salt, though. The age group wildly overestimates its early- and mid-career salaries, potentially leading to unrealistic retirement goals.[7]

Many workers view their retirement prospects more pragmatically. More than 1 in 3 Americans (38%) — including 42% of boomers — think they'll retire in their 60s near the average retirement age.

Approximately 10% of Americans don't think they'll ever be able to retire, though.

Among those respondents, women are 71% more likely than men to say so. Although some studies suggest women are more likely to participate in retirement plans, longer lifespans, the gender pay gap, and career breaks to care for children adversely impact women's retirement savings.[8]

Americans have less saved for retirement than they did before the pandemic in March 2020.

Nearly two-thirds (62%) of Americans with retirement savings spent some of it to make ends meet during the pandemic. Of those, about 1 in 6 (16%) spent $15,000 or more from retirement accounts.

As a result of depleted reserves, 79% of adults are worried they'll have to lower their standard of living in retirement.

It's a common concern across all generations, but it's particularly prevalent among boomers. Approximately 86% of boomers are worried their standard of living will be lower in retirement, with 47% saying they're very concerned.

With less time to offset a savings shortfall before retiring, boomers are 15% more likely than millennials and 38% more likely than Gen Z to say they're very worried about lowering their standard of living in retirement.

Rather than sacrifice their desired lifestyle, 40% of Americans have delayed their retirement plans to recoup losses from the pandemic.

More Than Half of Americans Believe They'll Outlive Their Retirement Savings

The pandemic destroyed workers' retirement finances, and 40% are now less confident than before the pandemic that they'll have enough money saved for retirement.

Those fears are exacerbated by the volatile economy as the pandemic decelerates. Large sums of relief aid created strong demand for products, but the supply chain remained hampered by a shortage of workers who reduced production capacity.

As a result, the U.S. has the highest inflation rate in 40 years, and 83% of Americans are concerned that their retirement savings won't stretch as far.[9]

The economy is clearly booming, with employers across the U.S. raising wages and adding thousands of jobs each month. But what goes up must come down, and some economists fear a potential recession.

Approximately 81% of Americans worry some part of the economy will crash in 2022, with almost half (45%) fearing a general market crash.

A recession can be particularly hard on individuals who are nearing retirement or have just retired. Market losses combined with a withdrawal of retirement funds may deplete reserves faster than planned, increasing the chance that retirees will run out of money down the road.

More than half (56%) of Americans believe they'll outlive their retirement savings.

Although men are more confident they can retire early, they are 5% more likely than women to believe they'll outlive their savings, indicating that early retirement may put them in a financially risky position.

Earning Too Little Is the No. 1 Reason Americans Fail to Save for Retirement

Among those who aren't saving for retirement, more than 1 in 3 (37%) say it's because they don't make enough income.

Working women in the U.S. make just 80 cents for every dollar a man makes.[10] That pay gap follows them into retirement. Because of lower lifetime earnings, women possess only 70% of what men have saved for retirement and receive fewer Social Security benefits.

50% of Workers Say Their Employers Don't Help Enough With Retirement

Providing a retirement savings plan and matching worker contributions is one of the best ways employers can help their employees save for retirement.

However, nearly 1 in 3 (31%) retirees say their company didn't offer a 401(k) plan or pension, according to a recent survey of retired Americans.[11]

Even when companies do offer a retirement plan, half of workers (50%) believe their employers don't do enough to help them save for retirement.

As workers quit in droves amid the Great Resignation, companies are raising salaries and improving their benefits to attract and retain top talent — earning the approval of younger generations who make up the core of the American workforce.

Social Security is intended to be only one part of a multipronged approach to retirement, but as Americans fall behind on savings, many retirees rely on the program as their primary source of income.

Nearly half of Americans (47%) expect Social Security to be a source of retirement income, but an even greater percentage (55%) think the program will run out of funds by the time they retire.

The Social Security Administration projects it will only be able to pay in full through 2037, before the oldest millennials reach retirement.[12]

Millennials are just as likely to rely on their own personal savings and investments as on Social Security. Almost half (46%) say they will depend on retirement accounts such as an IRA, Roth IRA, and 401(k) for income in retirement.

Surprisingly, 1 in 4 Americans, including 30% of millennials, say they will rely on cryptocurrency as a source of retirement income.

In April, Fidelity became the first retirement plan provider to offer 401(k) investors access to bitcoin.[13] Investing in cryptocurrency, however, is risky because of the market's volatility. In May, widespread sales of cryptocurrency erased more than $200 billion of wealth from the market in just one day.[14]

The Department of Labor urges extreme caution when considering whether to add it to an investment plan.[15]

The proprietary data featured in this study comes from an online survey commissioned by Anytime Estimate. One thousand and two non-retired Americans were surveyed from May 4-5, 2022. Each respondent answered up to 21 questions related to their financial situation, retirement preparations, and worries surrounding retirement and financial planning.

Fidelity recommends saving 3x your annual income by age 40. That amounts to about $107,000 for workers earning the median U.S. income. Millennials have $70,000 in retirement savings, putting them on pace to reach that mark. Learn more.

Fidelity recommends saving 8x your annual income by age 60. Baby boomers making the median annual income should have $286,400 in retirement savings, but they only have $112,000 in the bank — 39% of the recommended amount. Learn more.

Vanguard. "When Should You Start Saving for Retirement?."

CNBC. "Fidelity Is Offering 401(k) Investors Access to Bitcoin, the First Retirement Plan Provider to do so." Updated April 26, 2022.